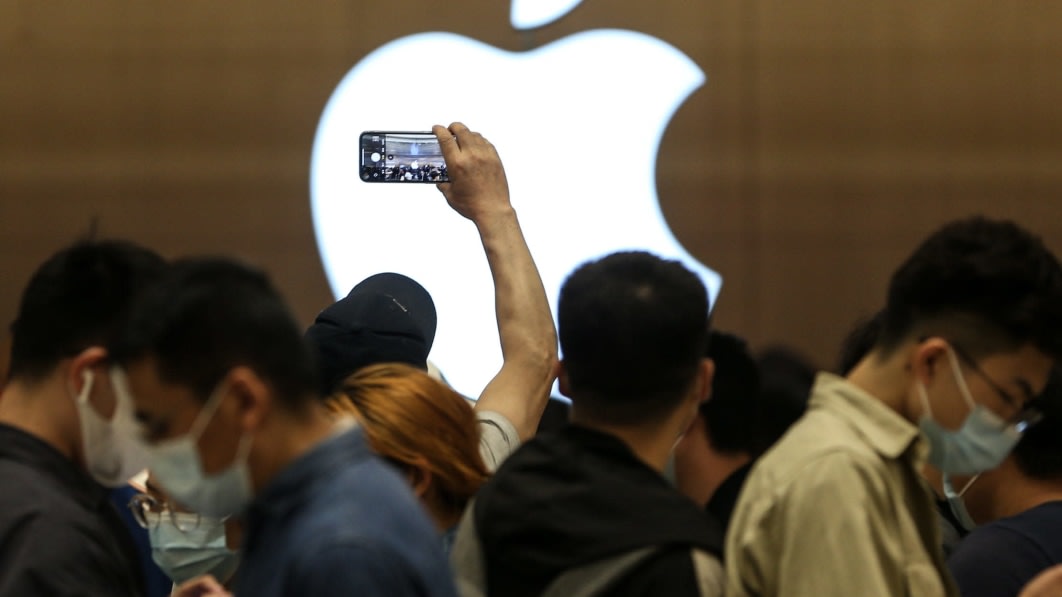 A senior Apple executive is leaving the company after a video of him making a crass joke went viral on TikTok, Bloomberg reports.

In a video published September 5 by TikTok content creator Daniel Mac, Tony Blevins — Apple’s vice president of procurement — was approached while getting out of his Mercedes-Benz SLR McLaren, a rare supercar that can cost more than $500,000.

When asked what he does for a living — the theme of many of Mac’s videos — Blevins responded: “I have rich cars, play golf and fondle big-breasted women, but I take weekends and major holidays off.”

He added: “Also, if you’re interested, I’ve got a hell of a dental plan.” The video has since been liked more than 140,000 times on TikTok.

Bloomberg reports that the video attracted the attention of Apple employees, who are said to have flagged it to the company’s human resources department.

Apple then launched an investigation that resulted in Blevins’ team of six direct reports and several hundred employees being removed from under his management, Bloomberg reported, citing people it said were familiar with the situation. Now, Blevins is departing the company, Bloomberg reported.

“I would like to take this opportunity to sincerely apologize to anyone who was offended by my mistaken attempt at humor,” Blevins told Bloomberg. His comments, he said, were a reference to the 1981 film “Arthur,” which contains a similar phrase.

An Apple spokesperson did not immediately respond to Insider’s request for comment.

Blevins has been with Apple for 22 years and reports to Chief Operating Officer Jeff Williams. According to a 2020 Wall Street Journal profile, he’s considered a shrewd negotiator and is responsible for making deals with Apple’s suppliers and manufacturing and delivery partners.

6 Ways to Fix iPhone Not Automatically Connecting to Wi-Fi

M1 MacBook Air knows how to have fun [Setups]

The best gifts for Mac users: 8 peripherals to complete your setup

How to use Advanced Data Protection & Apple's other new security features

Apple TV+ short film "The Boy, the Mole, the Fox, and the Horse" premieres Christmas Day

Glitter band turns your Apple Watch into a Christmas ornament

How to Message Yourself on WhatsApp from iPhone, Android, Web, and Desktop

Spruce up your iPhone 14 Pro with Noreve's latest cases

Over the Last Year, Bitcoin's Market Cap Slid From the World's 8th Most Valuable Asset to the 26th Position

★★★★☆ The sudden appearance of old nemesis Richard (played by Ariyon Bakare) means trouble on The Mosquito Coast. Photo: Apple TV+ Apple TV+ thriller The Mosquito Coast picks up its cliffhanger and heads into ever darker territory this week. Allie is caught between a rock and a harder place than ...

How to Turn Off Crash Detection on iPhone & Apple Watch

Some iPhone and Apple Watch users have noticed the Crash Detection feature of their device is inappropriately activating during activities that do not involve car accidents. For example, some users are finding the crash detection feature is activated on rollercoasters, when skiing or snowboarding, while mountain biking or road ...


View more: How to Turn Off Crash Detection on iPhone & Apple Watch

AT&T Offers Up to $1,000 Off New iPhone, Galaxy Upgrades Ahead of the Holidays

AT&T has brought back its "up to $1,000 off" deal for the holiday shopping season.


View more: AT&T Offers Up to $1,000 Off New iPhone, Galaxy Upgrades Ahead of the Holidays

This week’s major deals focused on third-party accessories from companies like Samsung, Anker, Nomad, Satechi, Twelve South, and more. In addition to these accessory sales, there were still plenty of Apple product discounts going on, including all-time low prices on MacBook Air, iPad, iPad Air, and more. Many of these ...

How to export Safari passwords in iOS 16 and macOS Ventura

Article Hero Image AppleInsider may earn an affiliate commission on purchases made through links on our site. If you keep your website passwords in Safari, there can come a time when you need to use one on another machine, or in another browser. Here’s what you can do. We are ...


View more: How to export Safari passwords in iOS 16 and macOS Ventura

ChatGPT: The Future of AI Is Here

Artificial intelligence (AI) has progressed in fits and starts for 70 years. It’s one of those technologies, like commercial fusion power, that’s always 20 years away. Now we may actually be on the cusp of an AI revolution. But it’s not the one you’re expecting. We’ve become accustomed to machine ...


View more: ChatGPT: The Future of AI Is Here

App Store Not Working on a Mac? 9 Fixes

Squishy physics makes JellyCar Worlds like no other driving game

Why Apple Advanced Data Protection Disappoints Some People; Here are Some of Its Issues

Deals: get a free $30 gift card with a Costco membership

How to add a Santa hat to your Memoji on iPhone

Apple is again accused of planned obsolescence of the iPhone

Best iPhone gadgets for people who love to cook

Emancipation, starring Will Smith, now out on Apple TV+

The 5 worst iPhones of all time

7 Best Ways to Fix Notification Badges Not Showing on iPhone

Almost 100 days after launch, iOS 16 is installed in 7 of every 10 iPhone models

How to watch Carpool Karaoke: The Series on Apple TV+

iPhone 15 Ultra: what we know so far

Apple announces ‘Beats x Kim’ collab, but all I see is shapewear

How to schedule emails on iPhone using iOS 16

The Morning Show season 3 will be ‘everyone and Jon Hamm’

HomeKit Secure Video: Why it’s great and why you should use it