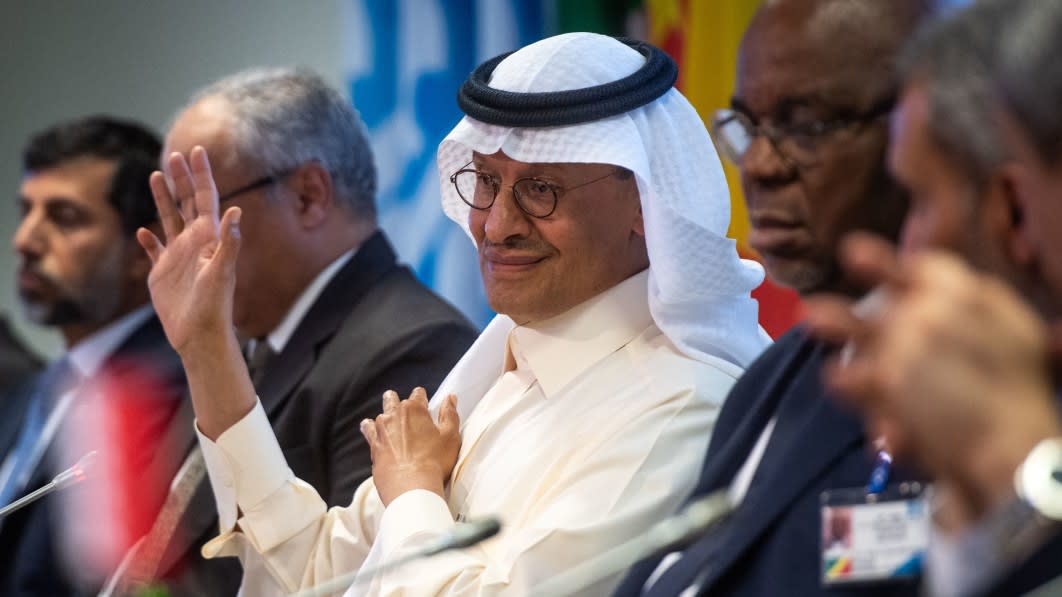 Energy ministers cut production by a larger-than-expected 2 million barrels per day starting in November after gathering for their first face-to-face meeting at the Vienna headquarters of the OPEC oil cartel since the start of the COVID-19 pandemic.

The group said the decision was based on the “uncertainty that surrounds the global economic and oil market outlooks.” Saudi Energy Minister Abdulaziz bin Salman stressed the cartel’s stated role as a guardian of stable energy markets.

“We are here to stay as a moderating force, to bring about stability,” he told reporters.

Besides a token trim last month, the major cut in the amount of crude that OPEC+ ships to the world is an abrupt turnaround from months of restoring deep cuts made during the depths of the pandemic. As demand rebounded, global energy prices have swung wildly since Russia invaded Ukraine, helping fuel inflation that is squeezing economies around the world.

The impact of the production cut on oil prices — and thus the price of gasoline made from crude — will be limited somewhat because OPEC+ members already can’t meet their quotas.

The decision could help alliance member Russia weather a looming European ban on most of Moscow’s oil and comes amid an energy crisis created by Russia reducing natural gas supplies to Europe, whose leaders call it retaliation for supporting Ukraine and imposing sanctions.

Oil is trading well below its summer peaks because of fears that major global economies such as the U.S. or Europe will sink into recession due to high inflation, rising interest rates and uncertainty over the war in Ukraine.

“We are going through a period of diverse uncertainties, which could come our way, it’s a brewing cloud,” bin Salman said, adding that OPEC+ sought to remain “ahead of the curve.”

The fall in oil prices has been a boon to U.S. drivers, who saw lower gasoline prices at the pump before costs recently started ticking up, and for U.S. President Joe Biden as his Democratic Party gears up for congressional elections next month.

“The President is disappointed by the shortsighted decision by OPEC+ to cut production quotas while the global economy is dealing with the continued negative impact of Putin’s invasion of Ukraine,” the White House said in a statement. “At a time when maintaining a global supply of energy is of paramount importance, this decision will have the most negative impact on lower- and middle-income countries that are already reeling from elevated energy prices.”

The Biden administration will work with Congress on additional tools to reduce OPEC’s control over energy prices, the statement said.

Biden has tried to receive credit for gasoline prices falling from their average June peak of $5.02 — with administration officials highlighting a late March announcement that a million barrels a day would be released from the strategic reserve for six months. High inflation is a fundamental drag on Biden’s approval and has dampened Democrats’ chances in the midterm elections.

Oil supply could face further cutbacks in coming months when a European ban on most Russian imports takes effect in December. A separate move by the U.S. and other members of the Group of Seven wealthy democracies to impose a price cap on Russian oil could reduce supply if Russia retaliates by refusing to ship to countries and companies that observe the cap.

The EU agreed Wednesday on new sanctions that are expected to include a price cap on Russian oil.

Russia “will need to find new buyers for its oil when the EU embargo comes into force in early December and will presumably have to make further price concessions to do so,” analysts at Commerzbank said. “Higher prices beforehand — boosted by production cuts elsewhere — would therefore doubtless be very welcome.”

Dwindling prospects for a diplomatic deal to limit Iran’s nuclear program also have lowered prospects for a return of as much as 1.5 million barrels a day in Iranian oil to the market if sanctions are removed.

Oil prices surged this summer as markets worried about the loss of Russian supplies from sanctions over the war in Ukraine, but they slipped as fears about recessions in major economies and China’s COVID-19 restrictions weighed on demand for crude.

At its last meeting in September, OPEC+ reduced the amount of oil it produces by 100,000 barrels a day in October. That token cut didn’t do much to boost lower oil prices, but it put markets on notice that the group was willing to act if prices kept falling.

The Best Pickup Truck for Driving in Snow Is an EV

This twin-engine beast is 'the first aquatic utility vehicle ever'

Drivers in tune with musical road

How Often Should You Drive Your Stored Car?

How Will You Configure Your Off-Road Lamborghini?

The Insurance Institute for Highway Safety (IIHS) is preparing their crash test facilities for the possible mass adoption of electric vehicles (EVs). Because EVs are heavy (it’s the batteries), the IIHS needed to make sure its evaluation equipment is up to snuff. This pressed the safety institute to replicate ...

This week on Chasing Cars: Amarok and Pathfinder reviewed, plus is Australia ready for a hydrogen Hilux?

Welcome back to your weekly wrap up of car news and reviews, where we find all the best stories of the week and condense them down into one easy read


View more: This week on Chasing Cars: Amarok and Pathfinder reviewed, plus is Australia ready for a hydrogen Hilux?

Chevron Malaysia Limited has just launched its first Havoline bikePro workshop to offer motorcyclists a convenient place for their bikes to be serviced by trained technicians. The MH Jaya Motor Trading workshop in Jalan Balakong, near the Batu 11 Cheras MRT station, is the first of an upcoming network. ...

Low What do you get when you combine a 2022 Jeep Wrangler Rubicon 4xe and a Jeep Gladiator? Well, if you have the talent of Greg Henderson, and his Unofficial Use Only team, you get the JTe you see here today. This project was set in motion by the aftermarket ...

2022 Subaru WRX RS sedan What is it? It’s the most WRX of all the WRX. Subaru has spent the last decade trying to create more distance between the idea of the ‘Impreza WRX’ and the ‘WRX’ as a standalone performance model. With this latest generation it may have ...

SpaceX sends OneWeb satellites to orbit on 55th launch of 2022

Save up to RM 10,100 when you test drive and post a photo of a Carsome Certified car

Winners of the 2022 GREENFLEET Awards announced

Waitress Once Tricked Into Winning Toy Yoda, Not Toyota in Hooters Contest

Full-Size SUVs With the Most Cargo Space

How to replace the car battery on a Proton X50

2022 Honda Accord Hybrid Review: Why the Lack of Consumer Love?

Custom Mercedes-Benz Car From Icon Is a Supercharged Monster

Me and My Car: Jupiter Project and the Opel duo

Richard Petty's Grandson Gets Full-Time Seat in Trans Am Series

There’s 1 Subaru Model No One Seems to Want

F1 Driver Daniel Ricciardo Plans To Ride Across The U.S. On A 110cc Bike